Feilding Intermediate has found a novel way of engaging students and building skills such as risk-taking and perseverance.

Skateboarding outside the square 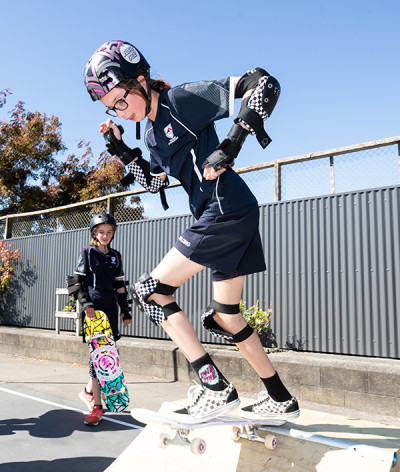 Isobel looks on as Ava drops in.

Jiselle Rider started longboarding at university as a cheap mode of transport. Her board went on her OE as well – mainly as a mode of transport, but she also rode urban hills with friends for fun.

“I taught my own children to skateboard, that’s when the penny dropped that it was more than just a skill. It was the psychological toughening that appealed the most to me as an educator. You have to keep trying, you have to take the falls with the successes, you can think outside the square and be as creative as you want,” says the Year 7/8 teacher at Feilding Intermediate School.

Skateboarding on the mark

The school has sought to design learning that engages students and helps to develop its graduate profile, says principal Diane Crate.

“We’ve got a graduate profile which has been developed in consultation with our community which outlines a range of characteristics such as risk taking, perseverance and having a positive attitude. Skateboarding presented an opportunity to provide learning in a medium that is really engaging for students.

In 2019, a grant from Sport Manawatu provided coaching, ramps, grind bars, protective gear and skateboards. In Term 4 last year, the whole school – around 350 pupils – learned to skateboard with Onboard Skate, an enterprise established by Steve Hodges and partner Janet Sayers to address the needs of a growing number of children and youth who are turned off or excluded from traditional organised sports. 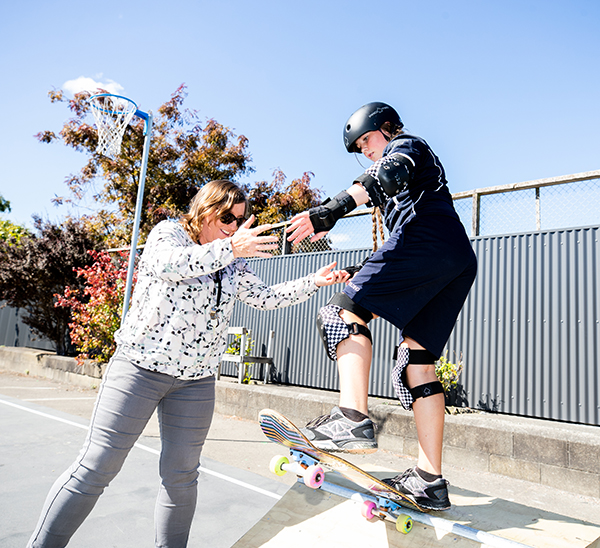 It’s always good to have a helping hand from the teacher. Jiselle steadies Samantha.

“It was really well funded and a good opportunity to get some experts into school that the students were motivated by – the fact the skateboarders could do things that the students thought were really cool was a plus,” says Diane.

“The unit I created around skateboarding encompassed everything from mental health to etiquette. It also is a time to empower those who aren’t always leaders in academic subjects,” adds Jiselle.

The students were excited about the initial lessons and because they were held in a safe environment, there were opportunities for some to shine and others, who were less confident, to learn a new skill.

“It could potentially feel quite nerve-wracking to go down to the skatepark if you haven’t skateboarded before, so it was really nice for them to have a safe environment to have a go and have their peers around them.

“Some of the students who were more skilled at skateboarding were different to the students who traditionally show up in other sporting activities, which was really nice. It’s always good to provide as many opportunities as possible for students to demonstrate their strengths,” says Diane.

In addition to the skills learnt through the skating programme, attitudes and behaviours developed on the skateboard can be transferred to classroom learning, says Diane.

“We have found if we look at mathematics for example, that often those dispositions of perseverance and risk-taking are the things that make a difference.

“So there’s real crossover when you can develop those skills and you can say to students: ‘you know how it was hard when you were skateboarding and you gave it a go and you fell off and kept trying and trying? It’s exactly the same when you’re tackling something in the classroom. When you’re tackling a maths problem, just because you’ve got it wrong, doesn’t mean that you don’t keep on going until you get it right’.”

“In skateboarding it was really easy for students to get gratification from when they started and might not have been able to stand up at all, to after a few sessions being able to skateboard across the court. When you watched them, you would see the most massive smiles on their faces because they were achieving something that they had never done before.

“The more opportunities we can provide for students to be successful, especially if they’ve had to overcome some nervousness, there’s more chance they will apply more confidence or resilience when they approach other learning tasks. I think it’s much bigger than just learning how to skateboard,” says Diane. 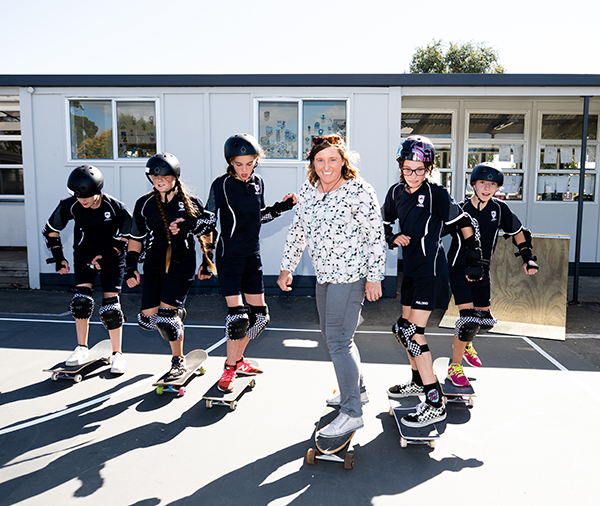 Jiselle shows some students that she's still got some moves.

“We know that lots of our children are frequenting skateparks after school and there were some conversations about safety that wouldn’t normally have happened. They’re now using elbow and knee pads and helmets. They’re having conversations around measured risk-taking.

Skateboarding continues as part of the school’s culture with an after-school club – a Rookies group taken by Jiselle on Mondays and an advanced group on Fridays. A key goal of the programme has been to remove as many barriers as possible so any student can participate.

“Transport to extra-curricular activities can be a barrier for some students. This is straight after school, at school – everything is provided. A massive range of students are doing it – you would never be able to pick who’s going to be able to skateboard because it doesn’t matter how tall, short, fast or athletic you are,” explains Diane.

Diane says there are students in the after-school club who don’t take part in any other extra-curricular activities.

“We’ll have some students who are going to something every day after school and we have students who don’t do anything – whether their parents are working full-time, or they have financial constraints. So it’s really cool to provide something that’s engaging and desirable and to have removed as many barriers as we possibly can.”

Jiselle says that skateboarding at Feilding Intermediate is inclusive and diverse.

“There is a tuakana-teina support system within these clubs with the ‘pros’ supporting the ‘rookies’. Genders are represented evenly in both the clubs. For example, a Year 8 student Samantha is there every Monday afternoon to give back to the beginners,” she says. 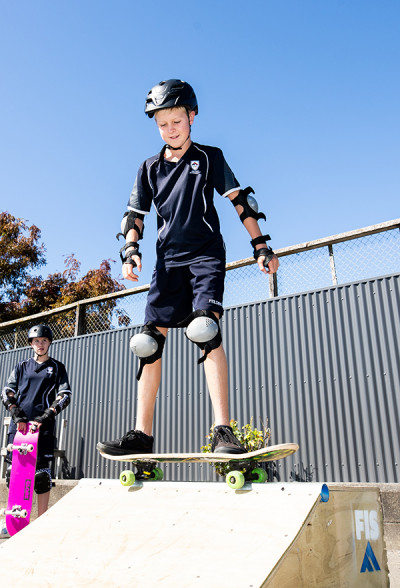 Frankie considers his next move, while Ciara waits her turn.

Jiselle spends time out of school at skateparks in the town and has noticed a positive skateboarding culture flowing into the community.

“A new skateboard park which the Council has opened in the town is very popular among young people. Jiselle has seen some of the kids from skateboard club down there skateboarding and sometimes forging friendships they may not have had before,” adds Diane.

“It’s really about providing something that caters for diverse interests and skill sets. The days are gone where we should just be providing rugby, basketball and netball – it’s about finding other ways to get students active,” she says.

I enjoyed skateboarding. I learnt how to do ramps, drop ins, and how to properly ride a skateboard. I am more confident now and I really like skateboarding. One of my highs were that I had lots of fun. One of my lows was that I sometimes almost fell off heaps. I showed a positive mindset by not giving up and getting back up when I fell. Skating is like relaxation for me and it helped my confidence. I liked trying different boards during the course we had. In my opinion It was one thing to look forward to on Mondays.  Josie, Year 8. 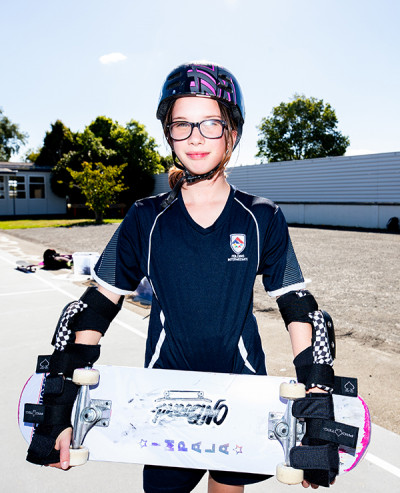 Ava in all the safety gear for the after-school programme

Before I went skateboarding, I learned about visualisation and how you should visualise what you are going to do and what it is going to look like, then I did some yoga to warm myself up. At skating, there were two ramps, and I do not like ramps, so for a long time I just worked on my cornering and had fun and at the last minute I went on the ramp (but only because Josie was going to do it before me). Billie, Year 7.

My feelings for skateboarding: I think it’s cool that we are doing it at school, but also I prefer it at home. Skateboarding can also help you believe in yourself and believe you can do everything. A lot of kids skateboard to help with anger, anxiety, and sometimes even depression. It can also be very fun for when you are bored and don’t really do any big sports.  Jay, Year 7.

BY EDUCATION GAZETTE EDITORS
Education Gazette | Tukutuku Kōrero, This email address is being protected from spambots. You need JavaScript enabled to view it.